Tinnitus refers to the perception of sound in one or both ears despite the absence of any actual external sound. It is often described as a ringing in the ear, though some people report a hissing, roaring, whooshing, buzzing or whistling noise instead. It is either intermittent or constant, and ranges in severity from a barely perceptible nuisance to a full-fledged distraction. Tinnitus affects an estimated 50 million Americans to some degree.

Tinnitus is a symptom rather than a disease and, as such, is the result of an underlying condition. There are multiple possible causes of tinnitus, including noise exposure, hearing loss, allergies, trauma to the head or neck, natural aging, earwax buildup, cardiovascular disease, ototoxic medications and certain disorders (e.g. thyroid diseases and Meniere’s disease). Some other factors can exacerbate tinnitus, including some medications, temporomandibular joint dysfunction and high stress. 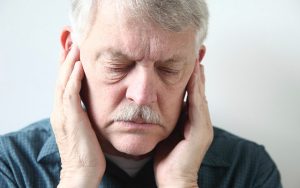 Occasionally, people with tinnitus can hear a rhythmic pulse that keeps time with their own heartbeat. This rare form of tinnitus is usually the result of vascular irregularities (e.g. abnormal blood flow in the inner ear). Pulsatile tinnitus such as this should be evaluated by an otolaryngologist (ENT physician).

There is no cure for tinnitus itself, but treatment of the underlying condition may help to bring relief. For instance, removing impacted earwax, switching to a different medication or treating a vascular condition can all bring about a decrease in symptoms.

A comprehensive evaluation of your tinnitus can help to evaluate your hearing, the impact of your tinnitus on you and the underlying factors which influence your tinnitus. This evaluation may involve the services of an audiologist and an otologist or otolaryngologist. Please call UCHealth Hearing & Balance at (720) 848-2800 to schedule a tinnitus consultation with our providers to learn more about your tinnitus.